These are my views on politics in the United States.

My goal is to look deeper into ourselves and our political system to find the root problems, engage in compassionate dialog and work towards meaningful reform. 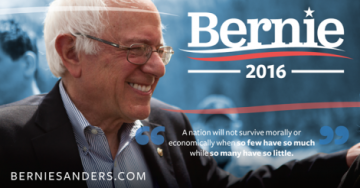 I don’t usually write about politics, but I’m truly saddened by the state of our country, political system and how many people consider Hillary Clinton to be a good choice. I am one of the millions of people who supported Bernie Sanders and was greatly disappointed when he dropped out. I believe he was the one electable candidate who might have stood up for real reform. (Jill Stein stands for reform and may have even better ideas, but has little chance of being elected.) I also believe that political shenanigans gave the election to Hillary. She was chosen before the votes were even made. I suspect Bernie came under severe pressure to drop out and support Hillary Clinton. Even Elizabeth Warren, who has made a career of fighting the system, is now falling into line to support HRC.

Please read my post and the articles before commenting.

I understand that politics is a charged topic and I risk offending people and challenging sacred ideas. When it comes to politics, many of us are stuck in our beliefs and will vehemently fight for them rather than have a meaningful dialogue with an open mind and heart.

Maybe what we most need is to slow down, listen to each other, find our common concerns and values, then explore how we can work together to make the world a better place for all.

Watching the stories on Facebook and the web, I’m amazed at how much media attention and energy we give to fighting over whether Hillary or Donald is better.

Many of my liberal friends are lighting up the internet with stories about Hillary Clinton being good and Donald Trump being bad. First of all, if you are daily promoting stories about Trump (pro or con), then you are actually feeding him, his media glory and his chance of winning. It is more effective to promote what and who you want.

Keep in mind the goal of our current system is to keep us engaged in surface conflicts so we don’t address the core problems like the excess military, corporate influences and oligarchy.

Now it’s just an oligarchy, with unlimited political bribery being the essence of getting the nominations for president or to elect the president. And the same thing applies to governors, U.S. senators and congress members.  ~ Former President Jimmy Carter 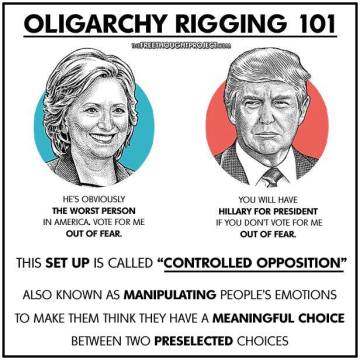 In my opinion, we have a broken and corrupt political system that doesn’t allow independent candidates or citizens a voice. We have the illusion of choice in a highly controlled system. If you doubt that statement, please learn more about the two party stranglehold on the elections, funding, media, debates, voter registration, etc. The corrupting influence of big money in politics is overwhelming the influence of the citizens. Until we repeal Citizens United and reform campaign funding, we can’t really have a government by and for the people. I will likely vote for Jill Stein if only to give the Green Party a chance at campaign funding. When independent parties receive over 5% of the popular vote, they are eligible for future campaign funding.

My primary concern is how the two parties, special interests, big money and corporations now control the systems that drive our politics and economy. Creating reform will be the focus of a future post.

My other concern is the excessive military expenditures in our country. We have the highest military expenditures in the world, selling 1/3 of the total arms trade to about half the countries in the world. The results are increased terrorism, endless wars, failed diplomacy, growing anti-US sentiment, increased domestic violence and gun deaths. This is not a recipe for world peace and cooperation.

Since Bernie dropped out, we aren’t likely to achieve reform in this election cycle. Maybe later we can if enough people wake up and demand change. I’m disappointed in our country, citizens, leaders, Bernie Sanders, Elizabeth Warren, the system and how many people believe Hillary will be good for our country. Yes, she will be less bad than Trump, but not good.

The Trump Surge article is full of inflammatory language but reveals many of the darker truths of our current system. My goal is to wake people up to the problems and reality of our current political system. Then we can explore how to create real reform.

And yes, I understand that Jill Stein has little chance of being elected and could take votes away from Hillary Clinton. Yet, if the 40% independent voters (who outnumber Republicans or Democrats) believed their vote mattered and voted their conscience (Bernie, Jill, or pick your own), the whole game could change. Hillary Clinton and Donald Trump are the least popular candidates ever. Here are counterpoints on why a vote for Jill Stein is More than a Protest Vote and why voting our values is important.

Please exercise your right to vote as per your vision, values and conscience.

Let’s create a system that represents the people, and helps build a world of peace, equality, social justice, flourishing, cooperation and care for the planet. Please share your thoughts on how we can create meaningful change.

We need to reclaim the responsibility for creating a better political system.

With feedback from you, I’ll write about how we can create real reform. Please share this post and start some dialog with friends, family and even antagonists. We’re in this together, so let’s communicate with kindness, compassion and respect.