Maybe it’s our ability to shine with such varied brightness that makes the human experience so beautiful and such a perfect medium for spiritual development.

Fellow WP blogger Cristen Rodgers wrote an insightful post called Don’t Limit Yourself, Explore the Truth Where Opposites Merge. We limit ourselves if we live strictly within our identities. Cristen suggests that we explore the transitions and areas where spirit and form blend and merge. Just like sunsets and sunrises that show the beauty of transitional light, we humans possess the ability to shine a rainbow of colors and experiences. Personally, as I’ve let go more of my judgements of what is good and bad, I’ve noticed life seems easier, brighter and more alive. May we embrace and shine our beautiful rainbow of light.

For truly sustainable living in the physical realm, we probably have to give up the ideas of constant growth. Our economic and cultural values of constant growth and consumption are destroying the planet. According to the Global Footprint Network, our current production and consumption are exceeding our planet’s biocapacity by 60% each year. The root environmental problem is excess consumption, yet almost all our models are still based on continued growth. This Ecologist article makes a compelling case for giving up growth as the path to sustainable living. Instead, we could embrace models that are based on the quality of life like Genuine Progress Indicator or Gross National Happiness that would allow more time and energy to enjoy life versus consuming it. 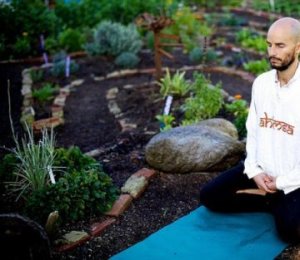 Pancho Ramos-Stierle is a wonderful example of living your values. He dropped out of college when he learned that the labs at UC Berkely had been contracted to build the next round of nuclear weapons. Instead, he embarked on a life of social activism. He’s been involved with Servicespace, Casa de Paz and many social justice projects. In this interview with the MOON magazine, he offers many insightful ideas on how to create social change through consciousness and direct action. “We need to honor diversity at the surface level and unity at the heart level, so that we can include all of these perspectives and move towards a more compassionate, harmonious Earth.”

I was recently reminded that Haas Hall Academy is the number 1 school in the state of Arkansas. Both Haas Hall and the founder have faced many challenges since it opened in 2004. Martin Schoppmeyer’s wife had a stroke just before the school opened, which was the start of many lean years. Finally, they were growing and slated to move to a larger facility when his father died. But Marty and Hass Hall have persisted and in fact thrived by utilizing the best teachers, high standards, proven methods, school uniforms and public funding as Arkansas’ first charter school.

The Haas Hall story is a good reminder for me to make goals and keep reaching for them.